‘Tall Cool One,’ The Wailers and the Northwest scene

TALL COOL ONE, The Wailers and the Northwest Scene Guest Post by John Broven
The Wailers, widely reputed as the pioneering Northwest band, bounced into the national spotlight in 1959 with their very first release, “Tall Cool One,” for Clark Galehouse’s Golden Crest Records way over on the opposite coast at Huntington Station, Long Island, N.Y. The label is currently owned by Shelley, Galehouse’s daughter, who happens to be my wife.

Not only were the Wailers a group of hip rock ’n’ rollers but, after leaving Golden Crest in 1960, they were also one of the first ensembles to operate their own record label: Etiquette of Tacoma, Wash. As the group and label became established, the band members-cum-record moguls turned to local photographer Jini Dellaccio for album covers for “Wailers, Wailers Everywhere” (1964) and “Out Of Our Tree” (1965). As well, she was commissioned for the three Sonics’ Etiquette LP covers in 1965-67: “Here Are The Sonics!!!” “The Sonics Boom” and “Introducing The Sonics.”

So, who were the Wailers and how did it all begin?

The group was founded during the initial rock ’n’ roll revolution by guitarist/cornetist Johnny Greek, who recruited fellow teenagers Rich Dangel (lead guitar), Kent Morrill (piano and vocals), Mark Marush (tenor sax) and Mike Burk (drums – and the only original living member). Feeling the need to make a record, Greek introduced himself to hometown bandleader/composer Art Mineo, a recording artist for the Columbia subsidiary, Epic. The inevitable label rejections followed, including one from prestigious Atlantic, according to author Peter Blecha. After Mineo and Mills Music of New York referred the group to Golden Crest, Galehouse recorded the Wailers on location after a dance in Tacoma during a visit to the Seattle area in early 1959. The pick of the tunes was an atmospheric instrumental, “Tall Cool One.” “Gee, I think we’ve got a hit,” Galehouse told Mineo, who dropped out of the picture to concentrate on his own musical projects. 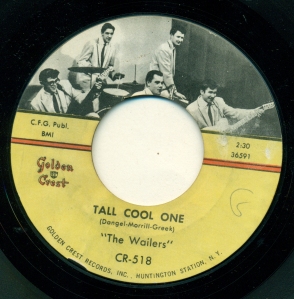 A high point was an appearance on Dick Clark’s nationally networked “American Bandstand.” The follow-up “Mau-Mau,” from the same session, was a jazzier, Mancini-like instrumental, featuring Greek’s cornet, that peaked at a disappointing No.68. By common consent the flip “Dirty Robber,” a screaming Little Richard-type vocal-piano rocker by Morrill, should have been the top side.

In June 1959, the Wailers made the coast-to-coast trip from the state of Washington in a Pontiac Fury station wagon to record at Golden Crest’s new Long Island studio. The sessions over three days, with past singles, led to the “The Fabulous Wailers” LP, itself an almost flawless musical concoction. Moreover, all of the 12 songs were written precociously by group members, led by Dangel and Greek. The evocative cover shot by Richards Studio of Tacoma, longtime commercial and studio photographers in the Puget Sound area, is full of rock ’n’ roll pizzazz and a work of art in its own right.

Greek was prepared to leave home for New York to make music a full-time career but the rest of the Wailers would not give the same commitment. Without the band’s wholehearted support, Galehouse did not take up the contract renewal option. At this point the Wailers set up the Etiquette label, with Greek being ousted in favor of bass-player Buck Ormsby who became another driving force.

In a quiet moment, when the Beatles were overrunning America, Galehouse postulated that the Wailers could have been the American equivalent of the mop tops. He did capitalize on the Beatles astonishing triumph by reissuing “The Fabulous Wailers” LP, described by Cash Box magazine as a “Liverpool sound album.” After a Detroit disc jockey started playing “Tall Cool One” from the LP, the single was reissued and became a hit all over again at a respectable No.38 in May 1964. Greek recalled that the record sold “200,000 copies,” presumably over its dual chart run. Morrill admitted in later years, when he was playing Roy Orbison tribute shows, that the Wailers let slip a glorious career opportunity with Golden Crest in 1959 in the wake of the “Tall Cool One” hit – now regarded as an all-time instrumental classic.

In his book, “Sonic Boom: The History of Northwest Rock,” Peter Blecha wrote: ‘The Wailers simply had a rock ’n’ roll sound like nothing else around – and bands in the Northwest, across the country, and even in England loved them.” The Wailers’ direct influence on the Northwest scene can be traced through the Ventures (“Walk – Don’t Run”), the Kingsmen (“Louie Louie”), the Sonics, a young Jimi Hendrix to Nirvana and Kurt Cobain. On a wider scale there was the group’s impact on surf music and garage bands generally.

If anybody is wondering, the Wailers were playing years before reggae-star Bob Marley adopted the same name for his accompanists. Declining to take any legal steps to protect their carefully nurtured identity, the Tacoma group merely added “Fabulous” to become the Fabulous Wailers – as in the title of the Golden Crest LP. The name confusion has probably hurt their historic recognition over time.

Meanwhile, Dellaccio was part of a legion of rock ’n’ roll photographers who went unrecognized for too many years. Among their ranks were Chess Records’ Don Bronstein, New York studio owner James Kriegsmann, Cash Box magazine’s Popsie Randolph and Charlton Publications’ Eddie Rocco. Now Dellaccio’s time has come with Karen Whitehead’s film, “Her Aim Is True.” That is as good an excuse as any for a “tall cool one.” Cheers to Jini and the Wailers!

Check out our Pinterest Boards for more on the Northwest Music Scene Jini Dellaccio documented!

John Broven is the author “Walking to New Orleans” (1974) [rereleased as “Rhythm & Blues in New Orleans (1978)], “South to Louisiana: The Music of the Cajun Bayous” (1983) and “Record Makers and Breakers: Voices of the Independent Rock ’n’ Roll Pioneers” (2009). He was co-editor of Blues Unlimited (mid-1970s), co-founder of Juke Blues Magazine (1985) and consultant at Ace Records, London (1991-2006). His website, also featuring Golden Crest Records, is at http://www.johnbroven.com.
This blog is based on Broven’s article, “Golden Crest Records: The Independent Record Industry Comes to Long Island” for the Long Island History Journal (see http://lihj.cc.stonybrook.edu/); also the Golden Crest chapter in “Record Makers and Breakers.”