MOMENTS OF JINI: A life of synchronicity in music and photography

A Personal Remembrance by Her Aim Is True director, Karen Whitehead
Having spent the last few years being connected to Jini, her remarkable artistry and life story, there are many beautiful memories to sift through. But when Jini died on July 3rd,at the grand age of 97, what filled my heart and soul was Jini’s beaming smile and warm greetings to the audience at the sold out world premiere screening of Her Aim Is True at Seattle International Film Festival last spring. In those moments, Jini’s grace, elegance, charm, and gentle nature just shined through. 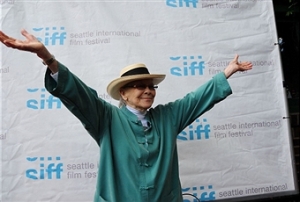 About three years previously, I had met Jini for dinner in her Seattle home. I mistakenly thought it was I that was going to be doing the “interviewing”, (to find out if she would be open to being a documentary subject herself.) Of course, like countless subjects of her lens decades before, we ended up just hanging out and having a wonderful conversation as old friends might. Jini talked to me with intense interest about what motivated my journey in the arts, filmmaking, my family background and life. In those few hours a bond was made that became a much stronger connection than I can ever put into words. But I am not alone. Jini’s capacity to love and care for those she meets is as legendary as her archive.

I saw these traits again and again during our filming. Jini filled each shoot day with plenty of grace and charm, wit and broad smiles. I think it is pretty bold to accept a documentary film crew into your life aged 93, and agree, as well, to take on the latest in digital photo technology to do a rock band photo shoot, about 50 years on from your last period of rock n’ roll photography. But that is Jini all over. She never said no and she did not follow rules, but marched to her own drum, so she took on every creative challenge and opportunity with a fearless quality. Her approach from the day she left school aged 17 to pursue a career playing jazz saxophone in all girl jazz bands of the 1930s, to the day aged 92 when she said “yes” to making the documentary, was always characterized by “why not try”.

All in all, Jini Dellaccio was not your traditional image of a rock and roll photographer and maybe that has a lot to do with the innovative and beautiful images she was able to create and why her life story is so enduring and relevant today. I now like to imagine people saying – “well, what would Jini do?” She would always say YES, often defying convention and her “age” to take any risk for creativity, and be generous in her artistry. 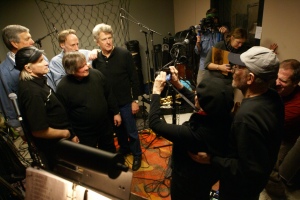 Jini Dellaccio photographing The Sonics at KEXP Seattle, 50 years on from the last shoot! Copyright Her Aim Is True, 2013

It is quite challenging to capture a life as well-lived as Jini’s in the short space of a documentary. But I think we caught something special, “the magic of Jini” as I like to now call it, when we filmed Jini with not just The Moondoggies, from the current Seattle rock scene, but Jini reuniting with the original punk rockers, The Sonics, at a live performance in KEXP radio station three years ago. Whether she was with the young rockers of now, or capturing her old subjects from back in the day, Jini was full of joy, heart, and love for each and every one of these musicians and their strive for creativity and independence. She told me more than once how much music influenced her life, and photography was a natural extension of her artistic passion. But the people making the music were just as important to her: her signature remark in the film is of course: “These kids came in and I just kind of loved them.”

In both music and photography, Jini’s human warmth and artistry were totally in sync, as they were evident in everything she did.

Her Aim Is True will be on worldwide release in September. Release date to be announced shortly.